The Maori are the indigenous Polynesian people of New Zealand origin. In this culture the tattoo has always been an art form considered sacred and continues to be highly revered today. Since the Maori consider the head as the most sacred part of the body, it comes as no surprise that the most popular type of Maori tattoo is the one made on the face, usually consisting of curved shapes and spiral motifs. Maori tattoos often cover the whole face, indicating a high rank in society and symbolizing power and prestige.

For the Maori the tattoo is a rite of passage and because of this it is a highly ritualized practice. The practice normally beings during adolescence and the tattoos are continuously enriched to celebrate the important events that characterize the life of a person.

In the culture of the Maori (and the vast majority of men) tattoos are highly respected, almost to the point where they are considered sacred and inviolable. 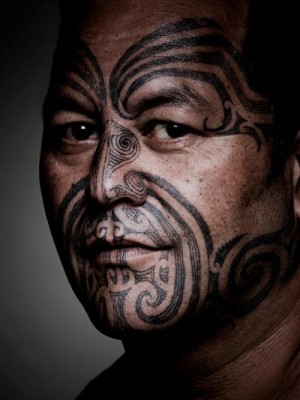 The original techniques used to create the Maori tattoo did not involve the use of needles, but rather knives and chisels made from shark teeth and sharp bones and teeth. The chisel, also called UHI, is generally made from the bone of an albatross, although some chisels can be made ​​of iron. Knives and chisels can have different shapes: flat, smooth and serrated, the choice of tool used depends on the kind of tattoo being made.

The inks used to create the Maori tattoo are also not of a sort that would be commonly associated with tattoos. The Maori use natural elements to create pigmentation such as burnt wood for blacks and fungus and burnt rubber mixed with animal fats to create lighter colours. The black pigment derived from the wood is used for facial tattoos, while others are generally used for the outlines for tattoos and less important aspects of the tattoo. The pigments are stored in decorated containers called Oko, and are much respected often becoming family heirlooms.

The Maori tattoo, a painful realization 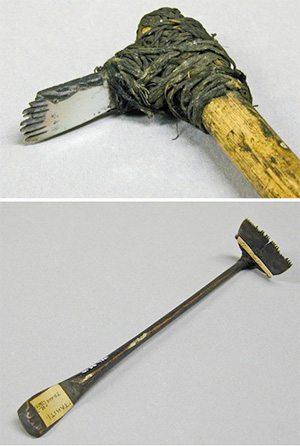 In Maori culture, before the tattooing process begins, the tattoo artist will carefully study the structure of the persons face in order to create a tattoo that is ‘made to measure’. In this culture there is no catalogue of images to choose from, and no two tattoos are the same.

Those who want to have a truly authentic Maori tattoo must also be ready to endure the pain associated with the traditional methods of making the tattoo. The first step involves etching deep cuts into the skin. Then the chisel is dipped in the chosen pigment and put into the cuts. In another technique the tattoo artists plunges the scalpel into the jar of pigment and after being inserted the skin is then beaten with a hammer.

Making a Maori tattoo is a long and laborious process, and since it is also very painful, only certain parts of the body are worked on simultaneously to allow healing before the work continues.

There are two major designs in Maori tattoos: The first design consists of simple, normal, blackening of the lines. The second, called puhoro, consists of darkening the background and leaving the pattern un-pigmented as clear skin.

Because of the sacred nature of the tattoo, the person undergoing the process of a facial tattoo, is often subjected to severe restrictions, such as not being able to eat with their hands, abstinence from sexual activity and from solid food. To avoid contaminating the skin that has been tattooed with food products, the recipients of the tattoo are fed through a funnel of wood until all wounds are healed. To accelerate the healing process a compound made ​​from the leaves of the tree Karaka is applied.

Only people with a certain social rank are allowed to have Maori tattoos. Many people, such as slaves and those with no social status are precluded from having certain types of tattoos such as facials. The Maori facial tattoo acts as a sort of identity card that shows achievement, position, ancestry and material status a characteristic beyond the reach of a slave.

Even areas of the face take on a different meaning and importance; the Maori face can be distinguished in eight sections:

The ancestors are shown on each side of the face; the left side is generally that of the father, the right side the mother.

The Maori tattoo has found a significant increase in the time of the vote, although, for obvious reasons, to date much more modern techniques are used to achieve them.

Fortunately, there are many associations that are fighting to keep away the tradition of a very old tattoo.

Here is where you can taste the Maori tattoos of our artists.