While having a tattoo, of any kind, is a personal decision, you can’t help but wonder about what other people will say especially if it is a religious tattoo that you are talking about. It is probably because you have been brought up by a spiritually devoted family, or perhaps, you are as passionate as any believer out there. Religious tattoo is often associated with Christianity. It is because the symbols typically depict Christian teachings, figures like Jesus Christ, and Bible narratives. But with several religions being practiced by in this world, it is safe to say that religious tattoos is not exclusive to Christianity but to Islam, Buddhism, Judaism, Neopagan, and Hinduism as well. Nevertheless, whatever religious symbol you want to have inked on your skin, it does not matter as long as it is serving its purpose well; its meaning, your relationship with your God, your culture and tradition, etc.

So, needless to say, there are people who get tattoos despite of their spiritual devotion to the Supreme Being. Most of these tattooed people take (religious-themed) tattooing as a solemn ritual or as a way to express their religious beliefs out to the world. With that, there is now a wide variety of religious tattoo styles and designs that you can pick from. 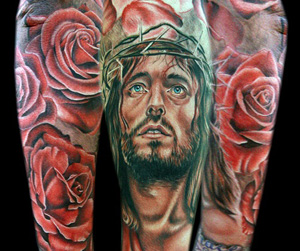 To be able to understand how some people don’t want to risk having a tattoo and why some prefer to have them, you should know the different perspectives of these major religious groups on tattooing. This can also help you with your decision-making in a while, so read on.

Generally speaking, there is no established Christian view on body art. Only the Judaists among all Christian sects uphold the strongest protest against tattooing based on the Leviticus section of the Old Testament.

It says, Ye shall not make any cuttings in your flesh for the dead, nor print any marks upon you: I am the LORD. (Leviticus 19:28) Tattooing involves the “cutting of the flesh” because the needles tear a layer of the skin apart. And when the flesh opens up, blood comes out and this can be associated to blood-letting, which is a common pagan ritual for unleashing some supernatural power from a person. The demonic and paganistic origin of blood-letting is one factor that gives tattooing a bad name so to speak.

However, there have been documented events that claim some Christians on pilgrimage get a tattoo to indicate the date and year they went on a religious journey. The religious tattoo usually comes in small size and is placed on the forearm.

The Roman Catholic Church does not set a certain prohibition on its followers regarding tattooing. The Church allows it as long as the tattoo does not represent any blasphemous message against the Catholic teachings. 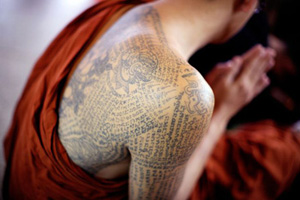 Tattooing is commonly practiced in many Asian countries. No wonder even Buddhism does not prohibit tattoos on its followers. Some monks in Thailand had even inked themselves with a symbol(s) because they thought of it as an amulet that can keep them safe and healthy.

Islam is another highly conservative religious that forbid tattoos. For Muslims, particularly Sunni Muslims, any form of mutilation being done on the body is a sin so tattoos are strictly forbidden. The body is a sacred temple that should be taken care of so doing a physical modification will make you disrespectful to the Creator. However, in Shia Islam, tattoos are not considered to be a religious issue at all. 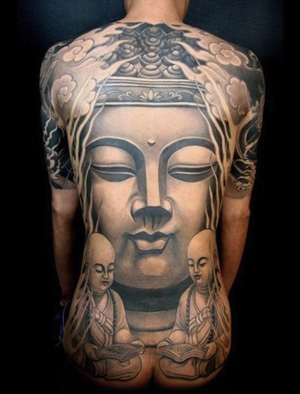 Hindus are allowed to have a tattoo. Some groups even treat it as a cultural practice because it is their way of expressing their beliefs on their deities. A lot of Hindu-Indians even wear a mark on their forehead because they believe it improves their spiritual development and relationship to their gods.

Some women would even put tattoo symbols (usually in round shape) on their faces to enhance physical appearance. Tattoos are an aesthetic factor to Hindus and tribal communities. It serves different meanings and purposes depending on the cultural group that does tattooing.

Now that you have gained a better understanding of how different religious groups view tattooing, you must be now interested in learning about some of the most popular tattoo designs in this genre. In most cases though, religious tattoos depict faces of Jesus Christ, the Virgin Mary, the Cross, cherubs, etc. 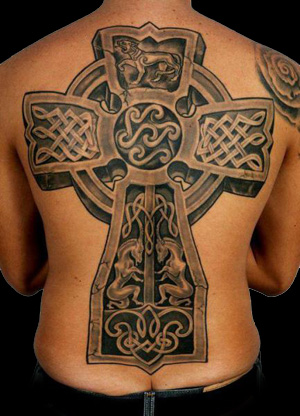 A considered minimalist design for it can be done in smaller sizes in the form of a simple wooden cross. It does not have to have an elaborate detailing, but depending on your preferences, you may opt to adorn it with the face of Jesus Christ or with cherubs surrounding the cross.

Celtics are culturally pagan by practices but they undeniably have great tribal tattoos that you can take inspirations from. Just clarify with your tattoo artist that you are targeting at getting a Christian tattoo but with Celtic style elaborations. 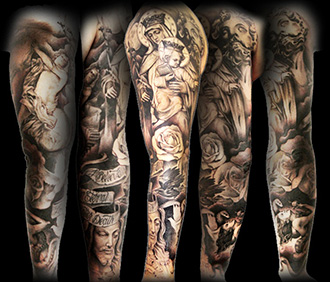 Similar to ordinary sleeve tattoos, Christian sleeve designs can also look stunning. It is perfect for telling a specific story about a saint, Jesus Christ, or whoever Christian icon you have in mind. You could also take inspiration from iconic Renaissance paintings like The Last Supper, Annunciation of the Virgin Mary, the Crucifixion, St. Peter’s Execution, etc. 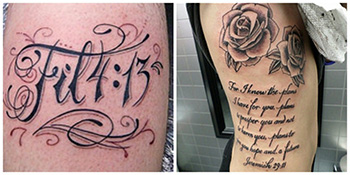 This one can help you send out a very clear and wise message to people. Simply choose your favorite words of wisdom from the Bible and ask the tattoo artist to design one for you. It can be a passage, a title, a reference to your favorite chapter and passage, and the like. 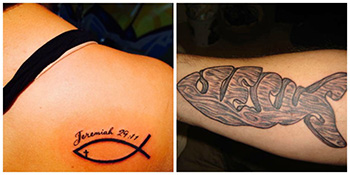 It is looked upon as one of the most symbolic tattoo design in Christianity. There is no precise meaning behind the fish symbol but according to history scholars, fish might mean Jesus’ secret meetings, where every time it’s held, he would draw the half body part of a fish while on his way to the secret meeting place. Once one of his followers figured out the fish drawing, that follower would draw the other half of the fish’s body part as he follows Jesus’ trail.

You can pick from a wide variety of symbols such as medallions, portraits of angels, saints or deities, an image of the heaven, the scripture, among many others that represent the religion’s culture and teachings. 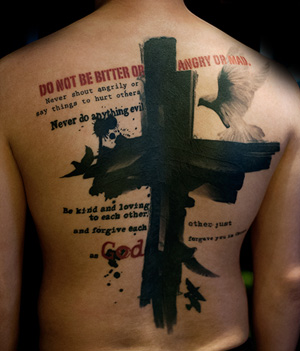 If you bear strong spiritual devotion to your religion, you should then opt to have tattoos that speak loud. This is usually done in large sizes that can cover up your back totally. Religious tattoos of this size will look very appealing, allowing you to make a statement and conviction about your beliefs. On the other hand apparently, you should go for smaller tattoos if you want to subtly express your faith in God.

It is always to be mindful of the meanings behind those religious tattoos, especially if you do not completely believe in the philosophy and ideologies of that religion. Tattoo leaves a permanent mark on the body once it gets there so it can be a powerful means to showing your commitment to your religion. Therefore, make sure that you are wholly and spiritually up to it before getting one.