Tribal tattoos are traditionally used for aesthetics, spiritual beliefs, and markings for a ritual passage (badge of honor) for men and women, particularly tribal warriors. The purpose of tribal tattoos may vary from one tribe to another, as some tribes in the ancient times did also use tattoos as camouflage when hunting in the woods. Meanwhile, modern tribal tattoo designs are derived from Aztec, Polynesian, Iban, Samoan, and Maori influences.

Multiple tribes from the pre-colonial era in Asia-Pacific, Northern Europe, Africa, and the Americas still exist today, from which modern tattoo designs are usually styled after. Some tribal tattooists are a direct descendant of tattoo artists from the older generations such as those that practiced hand tap tattooing from the islands of Polynesia, Philippines, Brunei, Samoa, and Hawaii. However, the designs may vary depending on the nature representations and colors. Some tribes such as the Aztec used a combination of grey and black, Micronesians are known for their bold blue shade, while the rest are inclined to use bold, heavy black pigment.

Characterized by its bold black loops, swirls, and hooks to depict a certain image of animals, deities, and other nature elements, tribal tattoos bear a symbolical meaning significant to a tribe's culture and tradition. Certainly, tribal tattooing should not be taken ever so lightly for its cultural representation so before choosing a tribal tattoo design for your body, you should at least feel comfortable and proud of wearing it. To give you some design inspirations, here are the 6 different types of tribal tattoos. 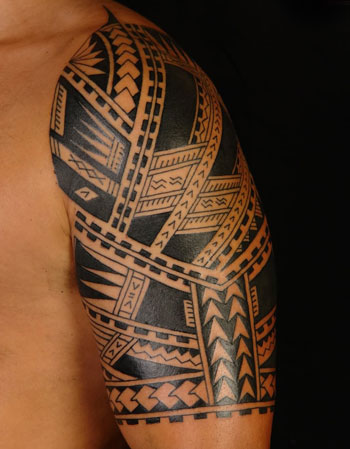 Perhaps the most popular kind of tribal tattoo, Samoan designs come in a wide variety. Male and female Samoans have a dedicated set of designs for themselves, in which pe'a (for male) are large and more intricate than the less subtle malu (for female). Pe'a tattoos are typically inked somewhere in the lower extremity of the body and used as a cover or protection from wild animals in the land and sea. Other popular Samoan styles are the Marquesan cross, ocean swirls, and sun rays. 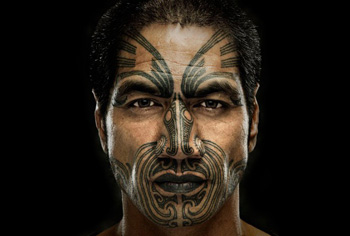 Maori tattoos are almost synonymous with face tattoos, with the head being a sacred part of the human body as they have believed in. Tattooing on the head is a form of body art that symbolizes one’s social status, prestige, and rank; a rite of passage that is given to the privileged few.

Maori tattoos are described by its intricate and high display of craftsmanship that no tattoos are alike. This is primarily because the tattooists are a specialist on their own and they use chisels and knives to carve shapes and figures into the skin. Needless to say, getting a Maori tattoo by a native can be very painful. There’s plenty of designs to choose from such as Te Ora, Pikorua, Te Timatanga, Nga Hau E Wha, Koru, Hei matau, hei tiki, twists, manaia, and so on. 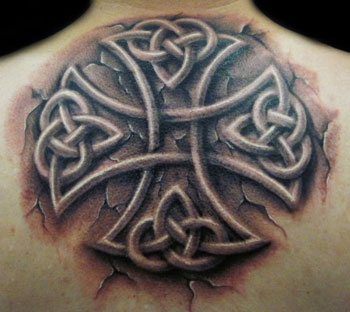 A tribe from ancient Britain, the Picts literally mean painted people. This tribe was popular before Christianity took over the state's religion and in almost all of Europe. Religion influenced the elites of society down to the commoners to think of tattoos as taboo. It also didn't help that tattoos were primarily worn by prisoners and soldiers during the last two centuries.

Celtic tribal design was commonly chosen, which is characterized by its cross and knots. Other designs include birds and trees that represent the ancient Celtic culture. A deeper religious influence can also be seen in some Celtic tattoos such as those that are designed with a pair of Angel wings. 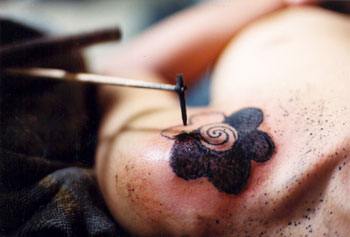 Iban tattoo designs are always charged with spiritual energy from plants, animals, and humans. Of all these styles, the floral motif can seem to be more common among the Dayak-Iban peoples. It is usually drawn out in large size and pitch black color. In fact, tattooing a large Iban tattoo could take eight hours. Placement of the tattoo is on the back of the shoulder, chest, and legs. 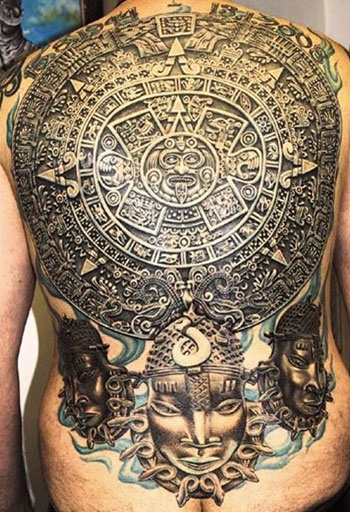 Less abstract as faces of Mesoamerican gods are tattooed clear and bolder than any other tribal gods of other indigenous cultures. The Mayan civilization is particularly known for their drawings of demons, wild animals, and ghosts that were carved into pyramid walls and human skin. The Mayan calendar is also a popular design, which rose to popularity during the 2012 Mayan prediction for the end of the world. Meanwhile, Aztec tattoo designs were spiritually charged according to their social status and achievements from war. For example, tribal warriors wear the image of Tezcatlipoca to give them protection. Other Aztec deities such as Quetzalcoatl and Huitzilopochtli were also commonly worn by tribesmen. 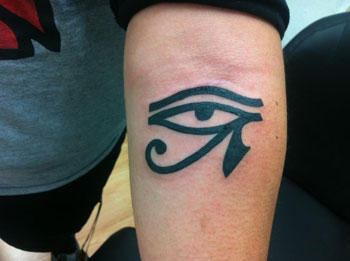 Inspired by the Egyptian religious belief, the Eye of Horus is meant to protect the wearer from evil spirits. Other religious symbols could be the Goddess of War, Neith, which is seen on male Egyptians as shown in the mummies dug up by archeologists. In ancient Egypt, tattoos have a significant meaning like social status. Those of the noble blood and warriors can wear large tattoos, and placement in the body often hold a deeper meaning, too. 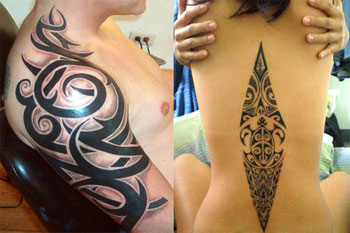 Where to put Tribal Tattoos

Tribal tattoos can be placed anywhere you want. Stretch tattoos like angel wings and large figures of animals are best placed on the back of your body. Men may like it inked on the upper back while the ladies will likely find placing it on the lower back more convenient to hide it easily. Smaller tribal tattoos would look good on the fingers, on the wrist, or on the side of your hand. Feet and legs are also great options for those who want to channel tribal warrior energy. Chest is of course undoubtedly a no-brainer for people who are interesting in having a tribal tattoo as large as a warrior's body armor. Overall, tribal tattoos carry a particular meaning that can be relevant to a particular tribe. Keep in mind that it bears spiritual energy and physical strength to some indigenous cultures so wearing it with respect should be observed at all times. Thus, it is important to choose a tribal tattoo design that echoes your own beliefs and customs so it can be meaningful to you and to other people.