A survey that was conducted in January 2012 found that one in eight people who have tattoos later elect to have them removed.

The reasons for wanting to have a tattoo removed include:

Some dermatological surgeons will tell you that complete tattoo removal is not possible. Tattoos are meant to be permanent and are therefore not that easy to completely remove, having said that there are several methods of removing unwanted tattoos that have proven to be effective.

The success of the tattoo removal and any color that may remain after the removal depends upon several factors such as the size and location of the tattoo, the individual’s ability to heal, how long the tattoo has been in place, how it was applied and how evenly the ink was injected.

The easiest ways: Cover Up

One of the easiest ways to get rid of a tattoo is to cover it up with another tattoo. While this method can completely remove all traces of the original tattoo, cover up art work is often darker than the original designs, they are generally bigger that the original tattoo and darker colored ink has to be used to make the original image invisible.

In cases where the tattoo to be covered is already very dark with strong outlines, in some instances laser treatment is required to fade the original tattoo in order for it to be successfully covered with new art work.

Tattoo removal techniques over the years

The method of tattoo removal has changed over the years. At one time a tattoo was considered to be permanent, today there are several ways to remove, or at least partially remove unwanted tattoos.

Before the arrival of laser treatments many tried the dermabrasion method. This method involves the use of TCA acid tricloacetico acid that removes the top layer of the skin, allowing access to the deepest part of the tattoo where the ink lies. Salt, sandpaper, a wire brush or a diamond wheel is then used as an abrasive to remove the ink before the skin is repaired with surgery. In cases where the tattoo is very large, sometimes it is necessary to have a skin graft to cover the area that tattoo has been removed from.

Dermabrasion is typically performed in a professional medical setting by a dermatologist or plastic surgeon. This tattoo removal method was very popular before the advent of lasers. Dermabrasion is an invasive procedure that typically requires the use of a local anesthetic. Since this procedure involves the removal of the top as well as the deeper layers of epidermis, and further down to the reticular dermis, this procedure always results in bleeding. Dermabrasion carries the risk of scarring, skin discoloration, infections and facial herpes (cold sore) reactivation.

In sever treatments blood spraying can occur that can only be controlled by pressure. After the procedure the skin can look very red and raw and it can take up to ten days for the skin to heal. As wall as tattoo removal this procedure is used for acne and other skin imperfections. Dermabrasion does not always completely remove all traces of the tattoo and more effective on small areas off tattoo on the more bony areas of the body.

Experimental observations of the effects of short pulsed lasers on a tattoo were first reported in the late 1960,s. In 1978 a carbon dioxide was used with limited success and was known to cause scarring. An argon laser was used on twenty eight patients in 1979 but again had limited success.

In the early 80’s the Q-switched laser became available from Dermalase Limited in Glasgow. Tattoos consist of thousands of particles of tattoo pigment that are suspended in the skin. While the skin, through its normal healing process, removes foreign particles from the skin, it is unable to remove tattoo particles because they are too big for this natural method. Laser treatments break up these particles into smaller fragmented pieces and that allows the body to remove them through natural methods.

Different tattoo pigments have different light absorption spectra. The laser used in tattoo removal must emit enough energy for the given absorption spectrum of the pigment in the tattoo to provide an effective treatment. Yellows, greens and fluorescent inks are harder to remove than darker blacks and blues due to their absorption spectra that falls outside the emission spectra of the laser.

The term Q-switching refers to the lasers short, high-energy pulses. The Q-switched Ruby, the Q-switched Alexandrite and the Q-switched ND Yag, the newest system in the class of lasers and particularly advanced in the removal of red, blue and black inks.

Laser tattoo removal will require several treatments. According to the National Institute of Health the newer Q-switched lasers are used in conjunction with a topical anesthetic and rarely scar the skin, however thin areas of skin are more prone to scarring than thicker layers. The lasers developed after 2006 are able to remove a broader range of tattoo pigments than the earlier versions of the Q lasers. 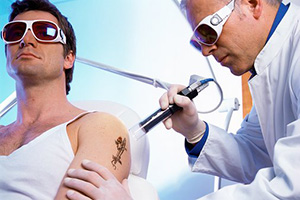 The pain relief used during laser removal involves cooling the area to be treated with a medial grade chiller/cooler and a topical anesthetic. During the treatment a laser beam passes harmlessly through the skin and targets only ink resting in a liquid state within. Some immediate results can be seen, however it is more usual for the tattoo to fade gradually over a seven to eight week healing period between treatments.

Laser treatments are very successful on smaller and older tattoo, because the ink is easier to break down. Patients should expect to undergo between five and twelve treatment sessions with at least a period of a month in between treatments. The whole process normally takes between six months to a year.

The laser procedure can be a painful process, often described as feeing like being repeatedly splashed with hot bacon fat or being pinged with a rubber band. After each treatment the skin can look like a burn that is healing. Patents should treat the affected area as if it were a burn after the treatment and apply antibiotic creams and keep the area covered. It is vitally important to keep the treated area out of the sun by either covering it or using sun screen.  It is also very important not to remove any scabs cause by the treatment as this will result in scarring. As well as scabs this treatment can result in itchy rashes.

One thing you must consider before deciding to have a tattoo removed is that having it taken off will cost considerably more than having it put on in the first place. The procedure can cost anywhere between a few hundred to several thousand dollars depending on the size and location of the tattoo and the number of visits required.

Generally your medical insurance will not pay for tattoo removal as it is considered aesthetic or cosmetic in nature. However traumatic tattoo, that result from accidents or injury are a different matter.

There are several tattoo removal creams available on the market but there is no evidence that any of them actually work. At best the cream may lighten or fade a tattoo however it will still be visible and with this method skin irritations and other reactions are possible.

Large and painful blisters can occur after laser tattoo removal. They should be treated in the same way you would treat a burn.

Keloids are large and irregular shaped scars that are a typical side effect of laser treatment. Some people are a genetic predisposition to this sort of scarring. In severe cases steroids can be injected into the scar to flatten them, superficial radiotherapy can also be effective.

Good quality tattoos can be very hard to remove and sometimes it is impossible to remove it completely. However laser therapy will fade the tattoo making it less noticeable even if it cannot be removed completely.

It is quite usual to experience white patches of skin where a tattoo has been removed. While these generally heal over time, some areas will remain white permanently.

Another very common side effect in addition to white markings and tattoos fading rather than disappearing is skin discoloration. In these cases the ink color laser acts on melanin in the skin, discoloring the treated area.

In addition to laser removal also exists a procedure that uses an acid solvent for inks but also involves the risk of developing infections and scabbing.