If archaeological records and ancient artifacts are to be believed, the history of tattooing dates back to as early as 6000 BC, more than 8000 years ago. Tattoos have been - and in some cultures, still are - a sign of maturity, or a badge representative of one's rank or position in the tribe or community, or even a symbol that marks a young boy's journey towards adulthood. They have also been used to denote tribal affiliation, with each tattoo depicting the story of an individual's heritage and family history.

Throughout most of modern history, tattoos have become closely associated with pride, identity, and the psychological need to stand out and be different. In ancient China, however, tattoos were also used to mark and identify convicted criminals. While the thought that prison tattoos originated from this cruel and archaic practice seems unlikely, they do share the same notoriety.

Over the years, prison tattoos have been given such a terrible reputation that they have spawned a culture of their own. It was natural for people to fear individuals who sported prison tattoos because they spent time in jail for some crime that they may have committed, and the stigma endures to this very day.

With the rising popularity of tattooing, many have decided that it was a good idea to wear prison tattoos even if they had never spent a single second in jail, simply because the designs looked awesome. If you are thinking about getting a prison-themed tattoo done, you might want to know what some of the more popular designs mean, just so you don't get into trouble with people who might think that you are part of a rival gang. 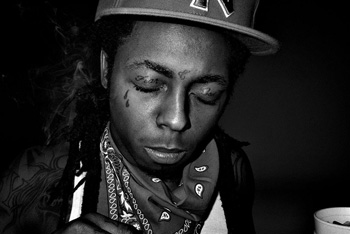 Rapper Lil' Wayne's teardrop tattoos are said to represent two family members who have been killed.

If you are looking to get a teardrop tattoo, be sure that you know what you are getting yourself into. Often placed just below the eye, teardrop tattoos can have several meanings. They can represent the number of years a person has spent in prison, or the loss of a loved one or fellow gang member. In some cases, it is also seen as a sign that the individual wearing it has - or is intending to - committed murder. In Mexico, teardrop tattoos may also signify the number of times the wearer was raped in prison.

Because of its simple design and ease of execution, teardrop tattoos have become a popular design choice despite the dark symbolism. Celebrities such as rapper Lil Wayne and basketball player Amar'e Stoudemire wear teardrop tattoos for a variety of personal reasons. This design has become so mainstream that just because you see someone wearing it doesn't mean that the person has spent time in jail. This is especially true for colored teardrop tattoos. Inmates rarely have access to colored ink while in prison.

The process is as ordinary as having a regular tattoo but since the second one is a cover up, the new ink along with its colors will go deep into the dermis at around 1mm. Thus, the old and the new pigments will combine altogether but the colors with darker and bolder ink would come out as the most dominant.

Consequently, black is the easiest choice of color to pick if you want to totally cover your regrettable tattoo. You just have to be careful in choosing the design because not all pure dark tattoos will look good on everybody. It will take a very talented artist to be able to pull off a darker tattoo as a cover up to the old one.

Like hide and seek, the artist will need to formulate an effective strategy in order to hide the original tattoo without making the new one look too complicated and trying hard. Factors like the size, style, area to cover and pigments are to be taken into consideration before application. 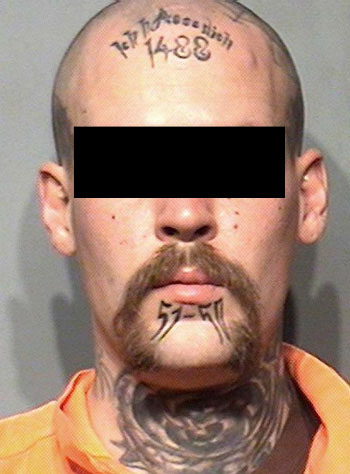 If your birthday happens to fall on the 4th of January, 1988, you might want to think twice before getting "1488" tattooed on your skin. This number, along with 14 and 88 on their own, have been used by white supremacists and Nazi inmates.

The number 14 represents a quote by notorious Nazi leader David Lane, which states that "We must secure the existence of our people and a future for White Children.", and the number 88 is shorthand for the 8th letter of the alphabet, written twice, or HH for "Heil Hitler". The number 14 can also stand for another 14-word white supremacist slogan, also by Lane, which states "Because the beauty of the White Aryan woman must not perish from the earth.".

The 1488 tattoo can be found anywhere on the body, although hardcore Nazional Sozialismus followers wear them proudly on their foreheads. If you really want to have your birthday, January 4, 1988, tattooed on you, consider having the whole thing spelled out. Or go for an entirely different design altogether. 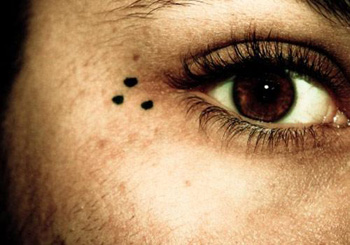 A three dots tattoo placed near the right eye.

Dots are arguably the simplest and most inconspicuous prison tattoo designs today. Easy to put on and requiring very littles ink, dots can represent a wide variety of meanings, depending on their number and placement. The three dots tattoo, for instance, is a popular prison tattoo that represents "mi vida loca", or "my crazy life". While not associated with any particular gang, this design is symbolic of the gang lifestyle. It is often seen on the hands or around the eyes. In some countries, the three dots tattoo also carries a religious significance, often representing the Holy Trinity.

A variation of the three dots tattoo is the five dots tattoo, or the quincunx. This design symbolize the time spent in prison, with four of the dots representing four walls surrounding the fifth dot, which represents the prisoner. The five dots tattoo can be seen in prisons around the world, particularly in Europe and the United States. This prison tattoo design is commonly seen on the hands, between the thumb and the forefinger. If placed on other parts of the body, or if done in a different orientation, the five dots tattoo can take on an entirely different meaning. Members of the People Nation gang are often seen wearing a five-point star or a five-point crown tattoo.

So plan your next tattoo carefully, if you don't want to be mistaken for somebody who has done hard time. Things as seemingly innocent as teardrops, random numbers, and even a bunch of dots can take on a much darker meaning, and you need to be aware of the significance of the symbols that you permanently put on your body. There are so many popular prison tattoo designs out there. It is important that you know the meaning behind these designs, and avoid the stigma that comes with each tattoo. Unless of course, you're going for that particular bad boy or bad girl look. Still, knowing the symbolism behind your chosen tattoo design saves you from ridicule, and worse, unwanted trouble.