Dragon is one of the most impressive and inspiring mythological creatures. Their cultural influence is especially strong in Asian countries. So, it comes as no surprise lots of people choose dragon as an image for their tattoos.

History of dragon character dates back to Ancient China and Japan. In those myths it's mainly depicted as a huge fire-breathing flying creature, associated with enigma and immense power. Such symbolism prompts both genders to apply dragon drawings as a decoration for their body.

So, in this article we're going to discuss symbolism of this animal as well as types and compositions of dragon tattoos.

Origin of the word

In Ancient Greek texts drakwn word stood for a fairy snake-like reptile. General term for snakes was ojix, however Greeks called large ones draconates, which probably meant to see strong. 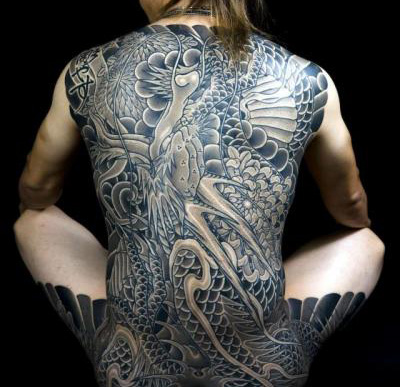 The earliest-known information about dragons refer to Sumerian civilization, once located in Mesopotamia – a historical region between Tiger and Euphrates rivers. Sumerian records were inscribed on clay tablets, telling the story of fight between Asag dragon and Ninurta god. Even in these legends dragons were guarding treasures, keep the floods back and pass the knowledge.

Babylonians, who inhabited Mesopotamia after Sumers, created a epos about Gilgamesh, who was sent to conquer a giant dragon Humbaba. Another dragon was Zu, most famous for his theft of the Tablets of Destinies, which was made clear by the many variations of the story. In one version, god Enki originally carried the power of the tablet before Zu flew off with it. Ninurta attacked the monster mid-flight, forcing the dragon to drop the tablet back into the apsu, Enki's watery domain.

As we have already mentioned, dragon is one of key symbols of Asian cultures. For instance, Chinese believed this creatures had powers to send or prevent rain. They play important role in oriental festivals an dragon dance is an ancient tradition that dates back to Sun dynasty (around 960 – 1279 A.D.). Inhabitants of the Celestial Empire considered themselves to be the offsprings of dragon, turning it into the emblem of the Emperor. Only the Emperor could use the completely gold-colored, five-clawed Long dragon motif, while the four-clawed one was typically for imperial nobility. The three clawed dragon was used by lower ranks and the general public. 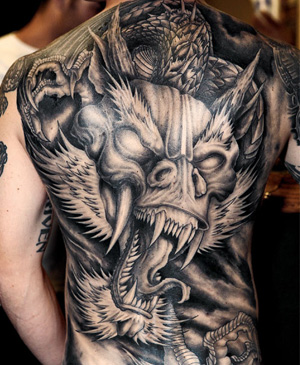 Classical Chinese dragon is depicted with horns, claws and scales, holding a fireball or a pearl that he swallows or spits out. That dragon pearl is a symbol of the Sun. Defining gender of a dragon is quite simple: the main sign is the tip of the tail. If ends with like a fluffy fan, it's a she-dragon. Besides, female dragons have straighter noses and curvier manes. Male dragons are shown with pike-ending tales and steep horns.

For Japans dragon embodies divine powers that could bring both good and evil. If one treats dragon with respect, it can be very generous to him or her, since those beasts were thought to be astonishingly rich. Unlike Chinese dragon, its Japanese version always have three claws. Dragon images are often used for decorations in Buddhist temples. Vietnamese and Korean stories about dragons are less known, but in most of them mostly referring to dragon as a water deity.

India also gave birth to some beautiful dragon myths, particularly about Vritra, who captivated the waters of the world and caused a terrible draught until he was killed by Indra god. Vritra is often described as an embodiment of winte, as its power is the darkness which prevails during cold season.

In Europe, dragons are seen as kings of evil. However, despite troubles and intentionally caused harm these chaotic animals were believed to cause from the earliest epochs, people felt strange reverence and appreciation before them.
European story about St. George is, probably, the widest-known in the Western world. According to it, a horrible dragon appeared in the region of Cappadocia, threatening to destroy it. Terrified inhabitants were forced to sacrifice a girl each year to appease the monster. It was the king's daughter who was about to be sacrificed, when St. George appeared and fought against the dragoon. After taming the dragon, St. George put a rope around his neck and handed it to the princess, who drove the beast back to the city. Another dragon could be found in the Anglo-Saxon epic poem Beowulf. Its thirds part Beowulf battled against a fire-breathing dragon. He managed to kill it, but the wound the hero received occurred mortal.

When you are choosing dragon tattoo design, it's important to consider well its location on your body, since this will affect the size and style of the image. Besides, the pose of dragon you select can make the whole image more or less impressive. For instance, the dragon with stretched wings and bare teeth will convey an aggressive message, mixed with the idea of hostility and power. 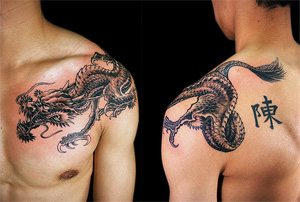 Shoulder blade is a good location for your dragon tattoo, as it has enough space and can be easily covered at the same time, when you need this. For this body part we recommend to choose an image with spread wings, so, due to the relief surface, it will will look even more three-dimensional. However, keep in mind, blade is a very moveable part of your spine and the design need to be really well-though, so its proportions won't get distorted seriously while moving.

Dragon image will look fantastic on large spaces, as it allows a tattoo artist to include more eye-catching and intriguing details that represent the grandeur and grace of this creature. That's why back is probably the best area for a dragon tattoo, being a sort of a living canvas for an impressive drawing.

In most of the cases, masters of tattooing recommend to avoid locating dragon image on your leg (at least on its lower part), since it's a really small zone that limits the artist's possibilities to express the whole idea, whereas waist and shoulders suit it more. 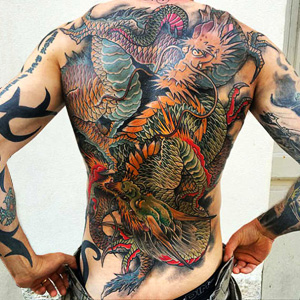 Color plays a crucial role in dragon tattoo. The design's palette can change the whole symbolism of the composition. There is a classic triade of the most popular colours for this tattoo motif – black, red and gold; apart from them, green is also frequently used.

Black dragon tattoo. Black color is actually an absence of colors, an absolute void, so it's associated with the qualities brought to their extreme. Thus, it comes as no surprise that both in Western and Eastern tradition black dragon is seen as pure evil and destructive power. In China, black dragons cause lightning storms when they fight one another in the sky. From the Jungaian point of view, black color can also refer to the shadow, unconscious aspect of our psycho. 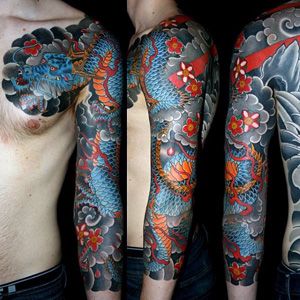 Blue dragon tattoo. Throughout all countries and cultures, blue is associated with water and air elements (sea and sky). This type of tattoo distance from the aggressive nature of this animal, focusing on its protective and magical powers. Chinese associations with blue include the approaching spring, prosperity and harmony.

Red dragons has numerous and often contradictory cultural connotations, since the red color itself stands both for love, passion and blood and power. The Chinese believe the color red to stand for good luck, wealth, and happiness, whereas in Christianity dragon assumes a double meaning, as a symbol of devil, sin and death to an important alchemic sign. This type of design will be consonant with emotional and active people.

The image of Yellow dragon was often used in the East during some military companies, so, obviously, its meaning can be interpreted as conquer and victory in contemporary context. Consequently, once chooses this image to show his power and purposefulness.